I’ve never seen anyone so excited to get braces on. She counted down for days and then in the last 24 hours all she said was “this is the last time I’ll do ‘whatever’ without braces!” (put on pj’s, eat dinner, eat toast, brush my teeth, ride in the car, etc…). She read the paperwork from the orthodontist from front to back and knows all “the rules” of what she can and can’t eat, how to brush, how to floss. And Grace loves rules so I am sure she’ll have the healthiest little mouth.

She lost her last baby tooth the night before her appointment, so we also had the last visit from the Tooth Fairy…She’s had a lot of changes in that little mouth for being only 9.

She did a great job during the appointment (especially compared to when she started orthodontia a couple of years ago) and afterwards we got fried rice, milk shakes and Yumm bowls.

She already had such a pretty smile. Now it’s brighter and shinier…

The Snow Day That Never Ends…

…it goes on and on and on…my friends.

We got about 6-8 inches of snow last Friday and it overstayed its welcome!!!

It was beautiful the first day. The kids played in it. Then the temperatures plummeted to zero and the air quality took a horrid turn and the kids were trapped at home for days. No school from Friday the 6th through Thursday the 12th. Owen didn’t get to go outside until he went to school the morning of the 13th. His asthma is terrible and we are just hoping for some warmer temps, air movement, maybe some rain and NO ICE. But mostly some good air quality for a change! It was so deceptive, it looked beautiful out and like you should be able to go get some nice fresh air. But no. The little man has been really patient with it all.

The gutter chain grew in to a large icicle.

Well, I know that no one is waiting for my “Go Ducks” post to find out whether or not the Ducks won the Civil War game…

For the last several years the game has really been no contest. This year, those Beavers put up a really good fight. The game was actually a close one. It was nice to have a competitive game that wasn’t the Ducks blowing a team out, or worse, being absolutely stomped on (Stanford, Arizona….). It’s always one extreme or the other.

I have to post this picture again of Owen and Daisy’s brother Burt sporting the Oregon “O”…made even more amusing since Burt’s owner (Danny’s brother) is quite the Beaver fan…Doesn’t Burt look so happy? He likes to root for a winning team every once in awhile.

Quote of the Day:
Owen: “it’s not nearly as exciting when the Beavers make a touchdown. I was just sitting here drinking my egg nog and ignoring the tv.”

I am not a fair weather fan…but I was ready to turn off the game last night. It’s one thing to play hard and be outplayed or outscored. It’s another to not really show up or seem to care. And that’s how the Ducks played on Saturday.

There were a range of emotions yesterday, and most of them looked like this…

And sadly…no Rose Bowl this year…

He was beyond excited when “Da’Nanthony Thomas” had an 86 yard kick return for a touchdown. He ran upstairs and told Grace (who was reading Harry Potter instead).

Her response “so De’Anthony made a touchdown, what’s the big deal? He does that all the time.”

Owen lost his first baby tooth last week. He wiggled it vigorously for weeks but once it was hanging on by a thread he was afraid to pull it out on his own.

He lost it at school. Now we will find out how big his permanent teeth are going to be…

We had a little ladybug and “Steve” from Minecraft this year.

We had a new/old neighborhood for trick-or-treating this year. We are just a few blocks away from the house that we lived in 4 years ago so we went to the old ‘hood to see if anyone was home. We were able to trick-or-treat at our old house and the new owners invited us in to update the kids measurements on the dining room doorway. They have left the old measurements just as they were and wanted me to put new ones up to see how much the kids have grown (Grace 7.5 inches, Owen 8.5 inches) since the last time we were there in February of 2010.

Strangely, it didn’t feel as much like home as it used to…But what a sweet little house it is…

The Ducks played a great game on Saturday! It felt like we finally had a bit of a challenge, but still seemed to have no problem taking control by the second half. They are sure fun to watch!

Get Up. It’s Gameday. 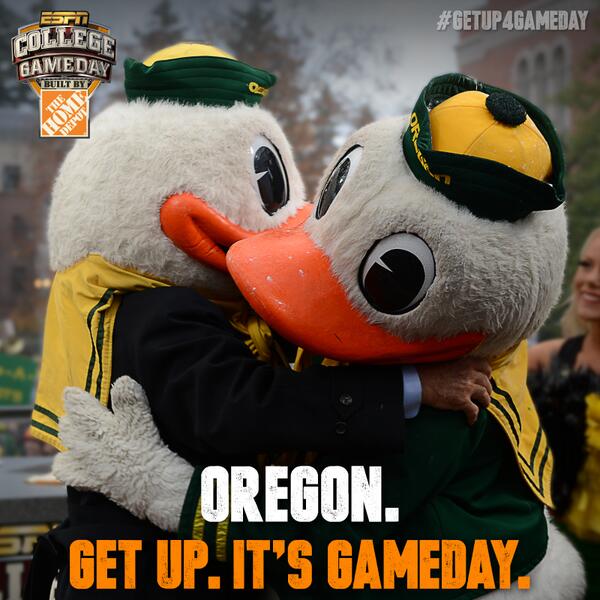 « Older Posts
"While we try to teach
our children about life,
our children teach us what
life is all about."
Angela Schwindth